Cranbrook, Devon’s first new town since Medieval times, was conceived as part of Exeter and East Devon’s “New Growth Point”, a large expansion of housing and industry to the east of Exeter to accommodate Devon’s growing population. From early on the idea was to create a more sustainable town which included a district heating and a combined heat and power plant, powered from locally-sourced, sustainable wood fuel, serving the whole community of Cranbrook, reducing energy bills and supplying unlimited hot water. It is estimated this saves an estimated 10,000 tonnes of carbon dioxide entering the atmosphere each year. The vision for the town was to provide: “open green spaces for recreation and education, a comprehensive public transport system, with a rail link, a network of cycle and foot paths, well designed low carbon public buildings, sustainable energy solutions and the early delivery of social and community infrastructure.”

After more than 15 years of planning building the town of Cranbrook was officially commenced on 29th of June 2011 with a turf cutting ceremony. This is now celebrated each year as Cranbrook Day. By the following year, 2012, the first houses had been built and occupied. One of the first families to move in before Christmas were Martin Park and Vicky Lovell, and their children, Jack, aged four and nine-month-old Annabella.

Vicky, 27, said: “I think it’s going to be amazing – there will be the new train station, and a new town centre. There’s a lot of interest – people are always driving down to take a look.” Vicky and Martin had previously been living with Vicky’s parents and then in a private rental house in Ottery St Mary, which suffered from damp. “We feel much more secure here. We are very impressed with our house. It’s a good size for a new build and has a decent sized garden,” Martin, aged 26, said. “Jack’s looking forward to starting at the new primary school in September and we’re all going to watch the nativity play there,” he added. Martin works as a poultry flocksman at a farm eight miles from Cranbrook. Vicky has just returned to work part time in the office of a small family firm.” 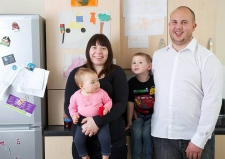 Images: Turf cutting ceremony, 2011. Cranbrook under construction. One of the first families.